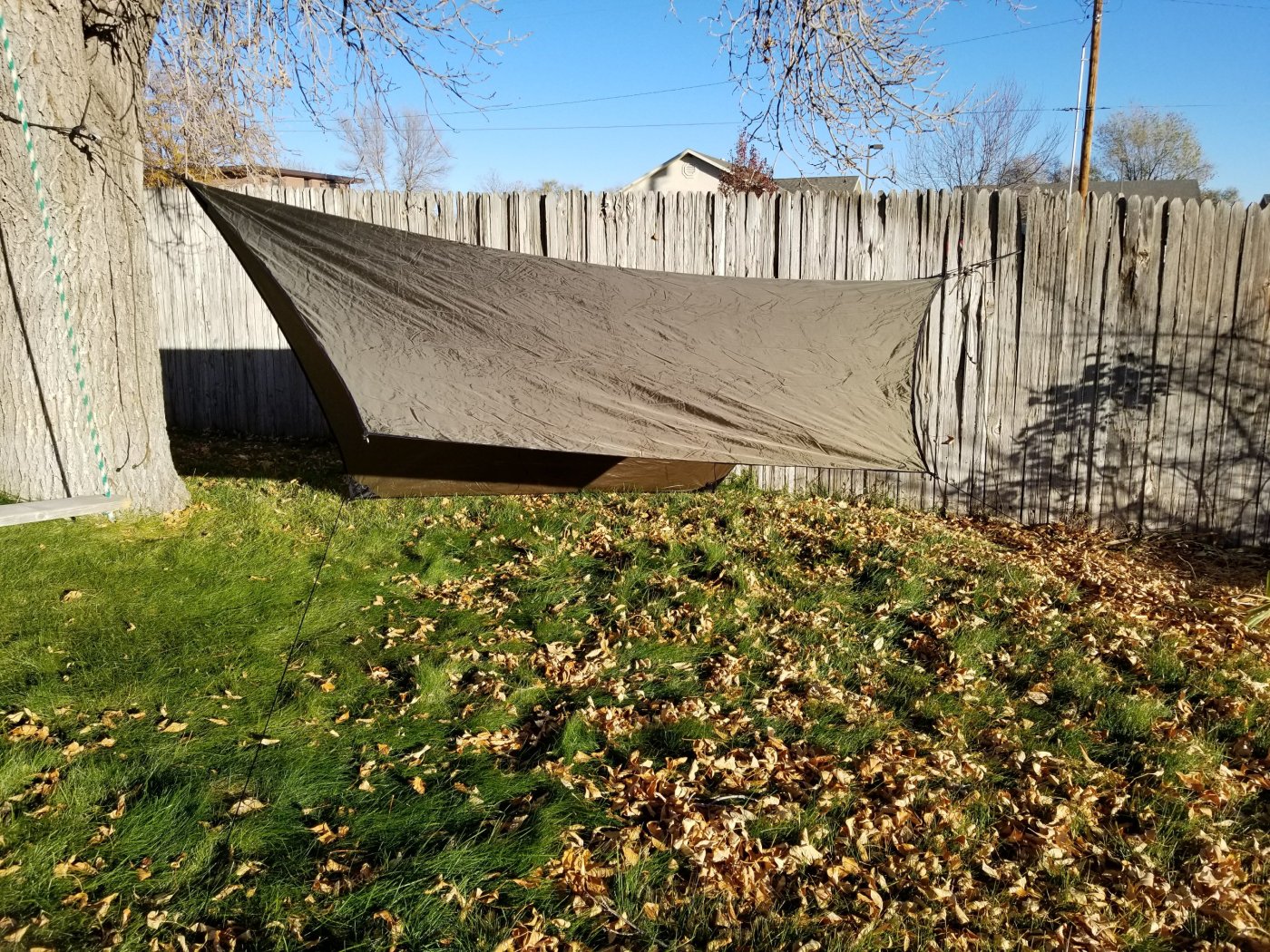 The hammock and pad showed up a while ago and I quickly spent a night setting up, adjusting and then sleeping in it. Let me highlight the fact that it was a single day thus an initial impression and not a full review. This also isn’t my first hammock, I’ve spent a lot of leisure time in a grand trunk double but only tried hunting out of it one time and about froze but it gave me a comparison point.

As I did research to buy a hammock strictly for hunting I was reminded of under quilts and told I’d need a longer hammock than my grand trunk. After setting up the HH it was very apparent that even with it being an asymmetrical it was not going to be much different than my GT in size, in fact the length and width was almost the same between the two. The bug netting however was a nice touch and with the “ridge line” feature the netting was never laying on you and also left you a nice little interior mesh pocket. While using my GT I would wrap the edges over myself when wanting full coverage which left a bit of a claustrophobic feel over your face.

The claimed weight on the HH is 3 pounds 3 ounces, this model is the deluxe explorer Asym zip which is a roomier and thus heavier setup. This already brings the weight of my sleep system up noticeably from my tent I was using and that’s without considering the tarp. For comparison the GT is 28 OZ and my Easton Kilo was 2.8 pounds. I quickly figured I could cut some weight by using a set of humming bird hammock ultralight tree straps and ditching the current straps, paracord, and D rings used for hanging the hammock. I have not had a chance to test it out with the hummingbird set up but those tree straps come in weighing a heavy 2.3 ounces. For an additional 2.3 ounces the HH came with a set of “snake skins” which are fairly slick accessories, they slide over the hammock to tightly encase it all when bringing it down and leaving you a more easily managed package. Although I do enjoy the ease of use they bring I’ve yet to decide if they will find a way into my back country sleep system or not.

The HH also came to me with an upgraded Hex tarp weighing in at an additional 23 OZ and made of 70d poly. The tarp so far may be my favorite piece of this set up. Tie offs with plenty of length, a good amount of ground coverage and a small pocket built into each corner to hold the tie lines when not in use all with what appears to be a very heavy duty material. I tossed in 4 aluminum stakes (200 grains a piece, weighed them on the arrow scale since it was close) to use instead of having to chase rocks or limbs to tie down to.

The hammock itself seems to be made to hold up to heavy use and is a very well thought out piece of equipment. It could fit myself and my wife with ease which could make it a good investment for someone looking to use it year round. The interior also has a bungee to put around your pad to help hold it in place. I will say that everyone informed me I needed a long asymmetrical hammock to stay comfortable and be able to lay flat. I didn’t feel that I had much of an improvement there over my GT, the pad seemed to gravitate to the center versus allowing me to stay diagonal but I stayed comfortable regardless.

I tested the HH with the new exped syn 7 down mat and the temps dropped just below freezing and I stayed comfortably warm even with my cheap 20 degree bag. I had an issue with the exped bag popping a baffle out of place and losing shape slightly but it stayed warm regardless. I called exped and they said send it in and you’ll have a new shortly, hoping I have no more issues with exped mats as it seems they really help keep me warm.

Hoping to really put some time into the system and do some serious tweaking this spring and will keep everyone updated.