Last year I bought a scale and decided to try to weigh and breakdown all the gear I was taking for the 2018 season. There was some good that came from it but honestly I never even finished weighing everything and I pretty much took the same stuff I’ve dialed in over the last 10 years of trying to archery hunt the back country. If you want to see the list or some weights check out last years post here. Some stuff changed this year from what felt like necessity, some from boredom, some for testing purposes alone.

This year two major changes to the hunt themselves have happened so my gear loadout will be much different than usual, first is the trad bow which really saves me a ton of weight and second is the fact I’m not back packing in for an extended stay due to the new baby at home. I figured I’d give a quick rundown on what will be going with me this year as a basic plan and I’m not putting anything to a scale so if you are a weight curious person please check out Google.

First off is the means of punching my tag- the stalker stickbow Apex ILF with medium limbs comes in at 60″ long and only about 43 pounds as it’s set up, it’s got a FF string on it currently shooting off the shelf with a black widow tab and a thunderhorn Lynx for packing my arrows around. The arrows will be day six 400 spines with 3 fletch right helical AAE trad vanes 100 grain outserts and topped with 150 gr cutthroats and bear razor heads both mixed in for a total weight of about 575.

Last year I ran the kifaru muskeg 5k bag and loved it but I got a great deal on the larger 7k bag for this year and made the leap, honestly I think I may have went over the top with the size increase but we will find out soon enough. The flipside to that is for the single day type hunts I also picked up an apollo that I can run, I’ve been running this smaller set up all summer and love it and think it will be a great day bag. The smaller pack may get some field time this year since it is capable of packing meat due to its meat shelf but I’ve never really ran a small bag like this before so I’m still hesitant. Kifaru pack accessories may include the lid and Sherman pocket for extra room or maybe even just stripped down to the quarter panel for packing out meat if I get lucky close to a main trail.

My clothing system hasn’t changed a ton in basic terms but I have been testing some variations, I grabbed some SKRE early season pants and love them as far as breathability but the extra noise concerns me with the stick bow. I’m currently trying out some firstlite obsidians to see if they win out over the prana pants of years past but either way it’s not rocket science when it comes to pants. Base layer wise last yest I made the switch to merino short sleeve and boxers from black ovis and am now trying out some aero wool and also some synthetic coolmax socks from darn tough. I’ll still be running my core heavyweight and Kelvin active as I absolutely love those two pieces but I’m testing out a light early season piece as well from a non hunting brand that I think has some potential. I’ll still be running my cheap military surplus “puffy” pants for now but will be picking up a set of the kifaru lost park pants eventually. The rain jacket/wind breaker is still my marmot lightweight jacket but for the winter season in Washington I’m planning to test out the heavy duty firstlite rain coat.

I’m still milking out my Lowa boots and hope they can finish out this year but it is definitely past time to hunt for their replacments. It may come as a surprise but alot of other pieces are actually staying the same this year; things like the steri pen, bino harness, headlamp, meopta 10x42s, kifaru pullouts, rangefinder, beanie, gloves and Havalon are going nowhere fast. However things like the sitka vest, sitka pants, vanguard spotter and tripod, essee knife and of course my compound are out of the running completely.

I’m still running a kifaru sleeping bag but have swapped to the bodybag from my slick bag and am having a hard time finding any real downfalls. I’ve still got my luxe hiking gear hexpeak but also am testing the mini peak, I’ve grabbed a kifaru para tarp and used it a bit through the summer and I also got the Luxe octopeak for a multi person base camp so my options there are pretty open and adding in my stove means I can do it all. I ditched my essee knife after last years elk break down fiasco and have picked up the new iron will k1 as my fixed blade and hope to put it to work on a few elk really soon! Another new thing this year is the field optics research tripod, this piece is something I’ve wanted for a while and finally got my hands on it! I’m pretty stoked with this upgrade and it’s cool features, I have actually teamed up with the guys there for a discount code for any of my readers so keep an eye out for more info soon! I also have teamed up with firstlite for some gear tests so that is why I’m incorporating them this year for the first time and have high hopes and expectations!

I’ve changed up a little on the way I organize this year and it’s been a pretty positive deal so far but honestly only showing it off in a video will do it true justice so I’ll get a YouTube video together for that soon! I have moved my first aid and daily stuff down into a smaller pullout by really trimming the fat. I’ve kept my kill kit pretty much identical though after this year I’ll probably be chasing new game bags down. A mega pull out for food is still essential for this fat kid when going multiple days, it will be stuffed with a crazy assortment of snacks and food from the back country fuel box that I’ve subscribed to since it started. I took one pull out and made it into my archery essentials bag and will also toss some camera gear in it to round it out. My favorite organization addition so far has been the XL pull out I turned into my camp bag. This pull out has my; ground sheet, stakes, lantern, sleeping pad, pillow, and the paratarp all inside. It’s a quick grab bag that when thrown with a sleeping bag has everything I need in an instant to have a shelter ready to go. I plan to leave the paratarp in there even if I’m taking another shelter since it has a lot of versatility to it.

I will still be packing my DSLR camera this year and trying to film with some better audio equipment. I’ve been using the kifaru sherman pocket as a camera bag all year which has worked great but I’ll be cutting down to the neccessary stuff and focusing on the hunt as much as possible. Hopefully I can still get some good footage but filling tags is definitely the top priority. I will also be leaving out the trekking poles for most of the day hunts since I can use the tripod legs for a pack out or to pitch a shelter when in a bind.

I’m sure there are plenty of little things I’m forgetting still but only a true gear nut will have even read this far along into my rambling so its probably time to bring this to a stop. Honestly a person could find stuff that works, never change it, and only spend money when something wears out but I just have too much fun testing new gear and seeing what else is out there and I think many others are like me and enjoy the off season chase…. 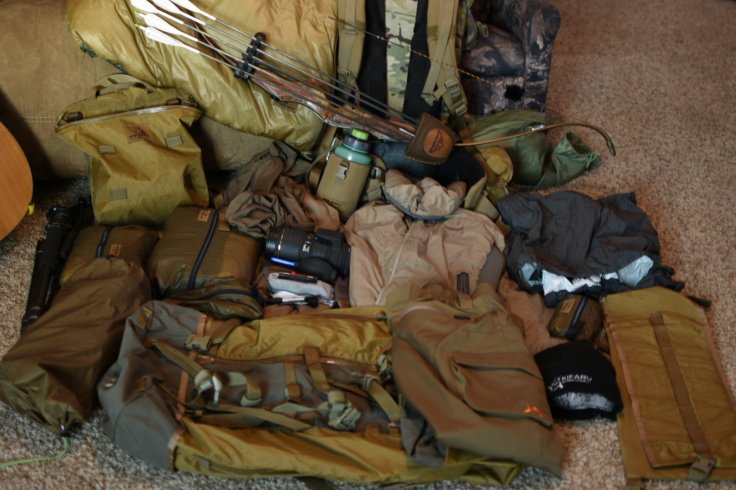 From one gear nut to another….