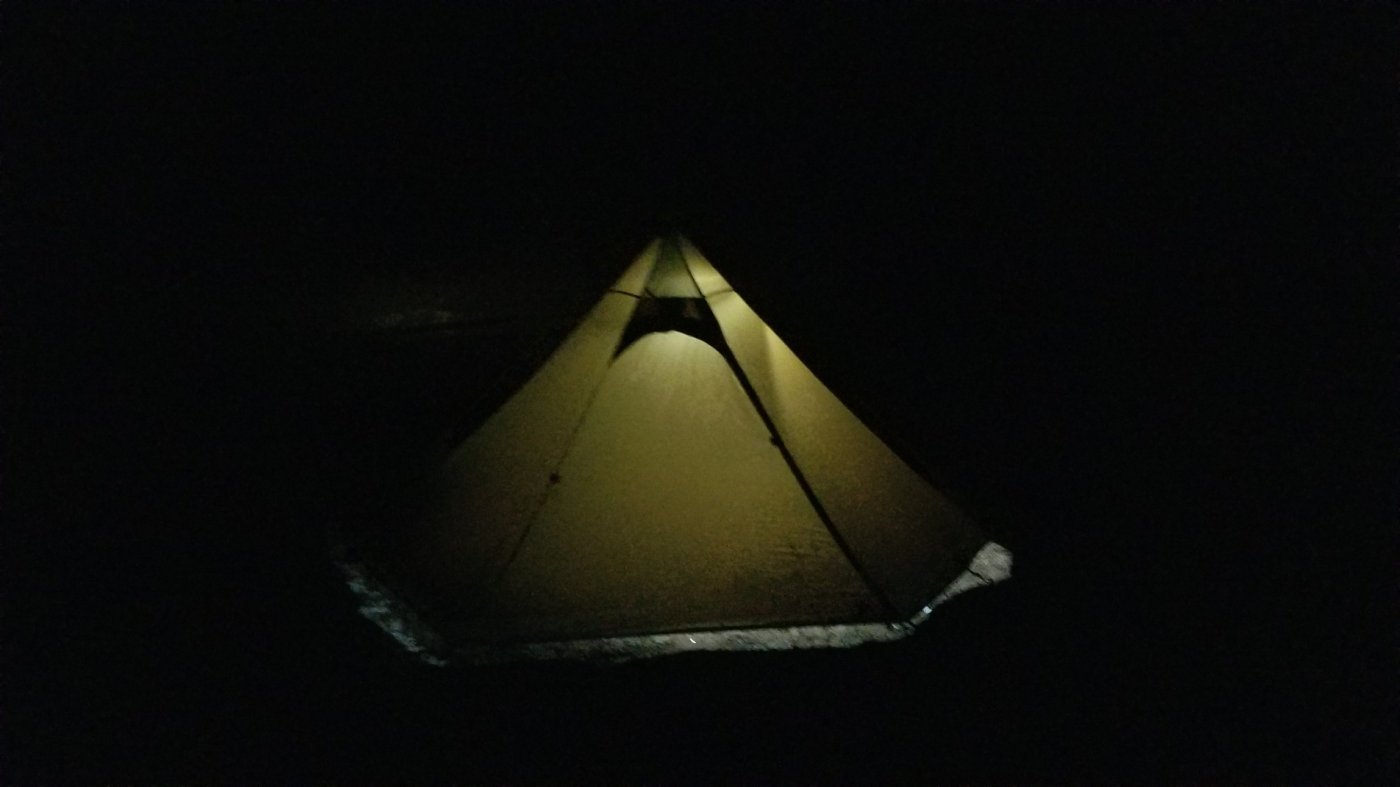 Last week I headed down to the bookcliffs with a truck full of new gear to test out. I didn’t make it to my planned parking spot due to snow drifts and mud, it was pitch black when I had to turn around and come up with a new plan and the weather was turning south. My first night found me camping next to some old corrals on a flat spot probably used for tents many times over. As I began to set up the Luxe Hexpeak tipi the rain switched to hail, the lightning was so close you couldn’t count to one before the thunder sounded off and the wind was just getting it’s warm up in. Without my dozen times setting up this tipi around the house I would have been truck camping for sure, as it was I had enough practice in to get it up fairly quick even with the weather. As soon as I got it set up solid the wind began it’s sprint that turned into an all night marathon.

The tipi held up, my exped sleeping pad and kifaru slick bag kept me warm even as the wind blew snow sideways through the gaps at the bottom of the tipi. I ran no extra guy lines, but many times that night wondered how long I had before I would be throwing something heavy on top of my collapsed camp and be crawling into the cab of the truck. Night one, wind test and ability to stay warm in below freezing weather were accounted for successfully. That morning I had a small issue getting out of the tipi as snow lined and then froze my zipper and when I pulled hard it jumped a few teeth, I used lip balm and the warm weather the next afternoon to get it all adjusted and working again hopefully for good this time.

That morning I drove many miles looking for sign or elk in the distance in the areas I was now located but hadn’t planned on being in. I hiked roughly 10 miles in the new prana pants, sitka core heavyweight hoody and Kelvin active jacket and the newer lowa boots with lathrop and sons synergy foot bed. All of the clothing worked great though the prana pants were probably a little on the light side for the snow and wind that was prevalent throughout the day. The boots were still not broke in completely and it was easily noticed but not a game ender and by the end of the trip they seemed to feel better. I used the new tripod plenty and was very happy with the way it held the bigger spotter steady compared to my old one. After my hike I pulled out the solo stove lite and 900 pot. I managed to build a fire and make coffee even with everything covered in snow and wet. It wasn’t fast or as easy as butane could have been but it still got the job done in far worse conditions than I plan to use it in while hunting. 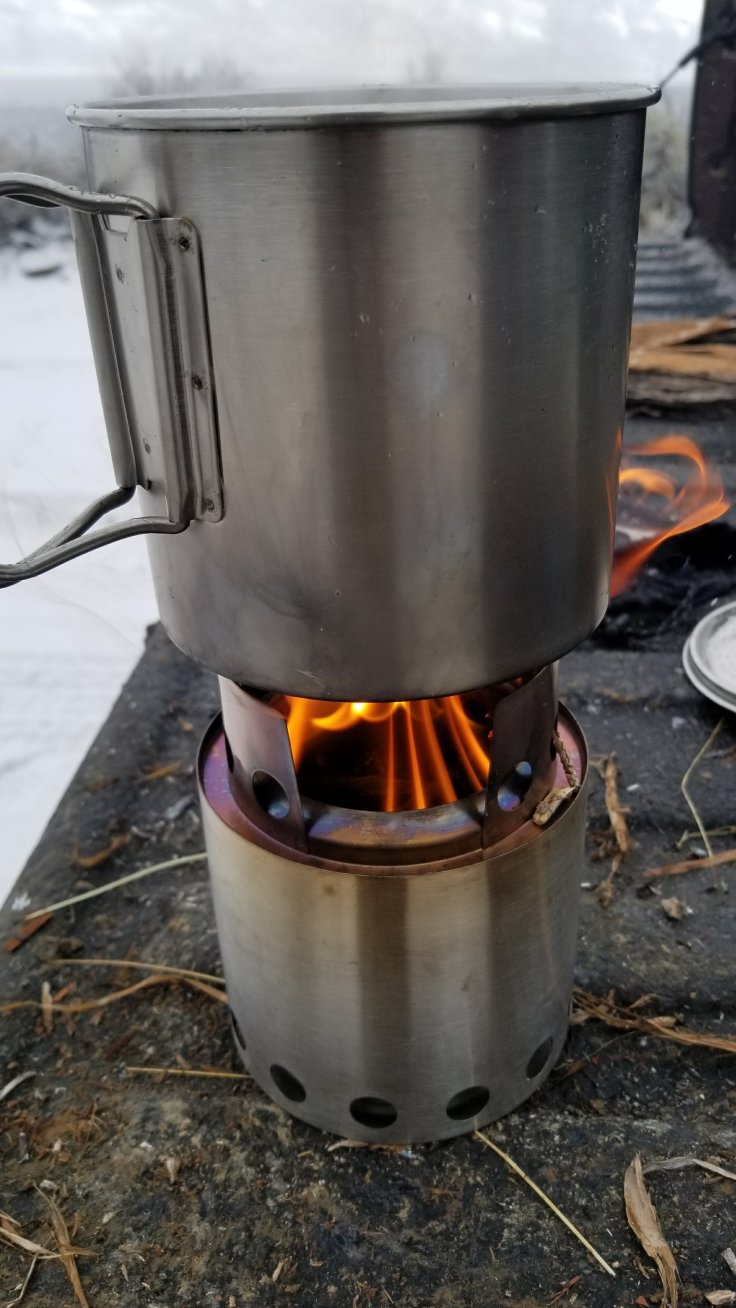 That afternoon I decided to move camp over 10+ miles from the corrals to where I’d seen the most elk and sign the night I drove in. This is when I fixed the zipper on the tipi and after the previous night I decided to cut my gap on the bottom of the tipi down a little more to minimize wind drift. After setting it up in a light hail storm I left to go glass elk from some knobs near the road where I watched bulls still packing both sides unfortunately. I returned at dark, crawled into the bag and fell asleep, I awoke to not wind but a weight against my head. It had began to snow HEAVILY, with not even a small gust to push it off of the tipi it appeared. The cheap cascade mountain trekking pole I used was holding up to my relief even with the bottom third of the tipi covered in snow. I reached to all sides and knocked snow off to relieve the weight and realized I was getting condensation inside quickly even with the built in vent open, I cracked the top zipper on the door and went back to sleep. I woke up a few times to knock snow off and continue on with my napping wondering if I’d be in the truck tonight due to a collapse.

I awoke just before first light still with an intact camp, however I was slightly trapped! The bottom half of the tipi was covered in snow and six or so inches of snow was on the ground outside, if not for the top zipper on the tipi I would have been forced to open the door and let the snow fall in. As it was I opened the top zipper to snow level and crawled out before bailing snow away from the door to get it open all the way and get inside to pull my gear all out. I spent some time pulling snow away and pulling my stakes out and breaking down camp, heavy snow test though unplanned was a success as well thankfully! The inside of the tipi was thirty two degrees according to my Suunto watch, the truck however showed it was nineteen degrees outside and as expected the tipi was lined with frozen condensation inside. Though a stove could have helped with the condensation I stayed warm and protected with the complete set up I brought and condensation was an easy pill to swallow compared to what I could have been dealing with.

That day I slowly drove and glassed my way down to the lower country to avoid the high snow and in hopes of finding something that had dropped horns. I went for a short four mile hike but really used the trecking poles in that slippery snow and they saved me multiple times. I even slid one time and found myself basically supporting my full weight plus my gear all off one pole, definitely feel these poles were a good buy for the cost! Yet again the animals I came across were packing both sides but when I crossed a fresh bobcat track a mile into the hike I found myself following it more than looking for antlered game. Thanks to that snow storm I now have a good home range for that bobcat and hope to go back and get an opportunity at my first!

Well that’s a quick run down of the trip and how everything held up! Many initial tests were done and had positive outcomes, now for the test of longevity!!